As a component of the exhibition, A Chicken in Every Pot and Affordable Art in Every Home, group curated by Dr. Slipp’s Spring 2021 Museum Studies class, student were assigned two prints each. They researched the artworks and wrote catalogue entries and labels for adults and children. Sticking to a tight word count, students produced different kinds of writing for different audiences.

The texts below were authored by AUM student Lee Rives 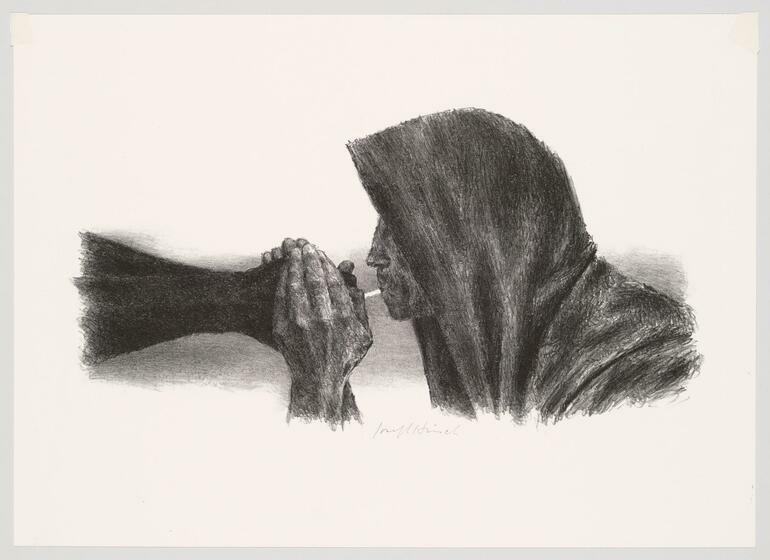 Label for Adults – Hard times are all too common, as evoked by this grizzled figure. Someone who knew this well was artist Joseph Hirsch, whose work shows a concern for the everyman. One can easily imagine this man in the soup lines of the Great Depression or as a down-on-his luck Korean War veteran. While he appears white, the hands offering a light are dark. Survival is all about connection and cooperation, the work suggests, signaling the cultural shift marked by the Civil Rights movement of the 1950s

Label for Kids – Everyone gets down on their luck now and then, as this lithograph shows. It is made by drawing onto a surface, then dipping it in water, covering it with ink, and pressing the image to paper to create a print.

Catalogue entry – The son of a physician born in 1910 to a Philadelphia physician, Joseph Hirsch was of German-Jewish heritage. Hirsch was an artist well versed in various medias from a long artistic career, but most of his many works for the Associated American Artists collection were lithographs.

Hirsch contributed over forty lithographs to the AAA catalogue between 1944 and 1974, focusing mainly on individuals and their lives, ranging from intimate nudes to street scenes to court scenes. The harsh black and white lines of his lithographs present a meticulous eye for detail and shading, even in such a simple element.

Survivor shows a hooded man leaning forward to have a cigarette lit by a shadowy hand. His face shrouded by the rough fabric of a hood, the main details visible to the viewer are his work-roughened and lined hands, alluding to strength- both of will and character.

Label for Adults – Everyone loves their pet! In fact, this is one of several Masurovsky portraits of Sardi. This etching shows a mastery of the technique, from the thinner – and therefore paler – scruffy details of Sardi’s fur to the thicker – and therefore darker – background. Masurovsky’s skill at texture and movement is on full display here, with Sardi’s lively form taking up most of the small frame. His eyes seem to twinkle with mischief and ears twitch with energy.

Label for Kids – Dogs are man’s best friend, right? This etching certainly shows a good boy! A protective coating is put on a metal plate and scratched away in certain places before acid is applied, which “etches” in the desired image. Ink is applied and the plate is pressed to paper, creating the image.

Catalogue entry – Born shortly after the start of the Great Depression, Masurovsky’s life was shaped by this era. Most of his early life was spent in the Bronx, moving often due to his family’s financial difficulties. He studied at the High School of Music & Art and Black Mountain College before joining the military and serving in the Korean War as a medic. He would later go on to teach drawing at the Minneapolis College of Art & Design, the American Center in Paris, and several art schools in Paris.

Masurovsky contributed twelve etchings on various subjects to the Associated American Artists collection from 1966 to 1981. One of his largest sets was a collection portraying elements of Carl Sandburg’s poetry. However, Sardi is a stand-alone piece, portraying a dog gazing intelligently at the viewer. Through variations of depth and width of line, Masurovsky creates a sense of coiled energy and affection.

The Cason McDermott Art Gallery is a 600-square foot exhibition space located on the campus of Auburn University at Montgomery. The Gallery is an integral part of the programs and curricula of the Department of Fine Arts and the College of Liberal Arts & Social Sciences. High quality, thought-provoking exhibitions are presented throughout the year to engage the university and wider Montgomery community. The gallery features regionally and nationally recognized visiting artists, works by Fine Arts Department faculty and students, alongside exhibitions curated by Art History and Museum Studies students and faculty. The Fine Arts Department also boasts a collection of paintings, sculpture, and works on paper, with strengths in 20th-century prints. Rotating exhibitions draw upon this material as well. View all posts by goodwyngalleryaum